A notable contribution towards reducing the digital divide of countries across Africa, Asia and South America, could be observed if governments choose to open the 6 GHz band for unlicenced access. Studies published by the DSA and Telecom Advisory Services LLC (TAS), with sponsorship from the UK Foreign, Commonwealth & Development Office’s Digital Access Program (DAP) demonstrated the benefits of enabling unlicensed access to the 6 GHz band. Conducted by Dr. Raul Katz and Fernando Callorda, the studies examined the economic value of unlicensed use of the band by looking at the impact on service quality, affordability, coverage and impact on different applications and use cases.

Unlicensed access to the full 6 GHz band will result in a notable contribution towards reducing Indonesia’s digital divide, with an incremental 1.1 million Indonesians being able to gain access to the internet by the end of 2031. Last year, the first commercial 5G deployment was seen in Jakarta; almost every device that connects to a cellular network relies on Wi-Fi in some way to connect devices in the home or workplace, so as there are denser connections via cellular networks, demand will also increase on the Wi-Fi networks that are the final link to user devices. 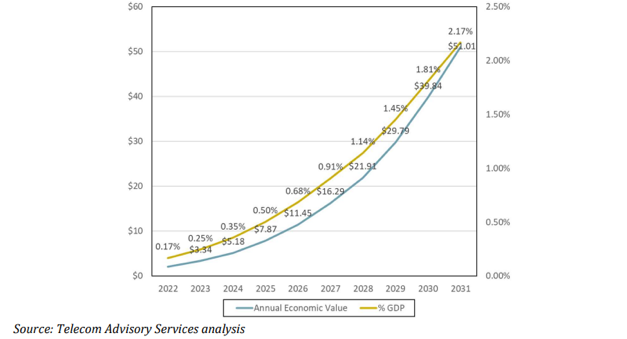 The findings of the study revealed a significant early economic impact following the allocation of 1,200 MHz in the 6 GHz band for unlicensed use. For Indonesia, the cumulative economic value between 2022 and 2031 associated with enabling license-exempt to the 6 GHz band amounts to US$ 187.63 billion, with US$ 126.44 billion contributing towards GDP. The economic impact of opening the entire 6 GHz band for unlicensed use is expected to increase over time, eventually becoming responsible for 2.2 % of the country’s GDP by 2031.

The African Telecommunications Union (ATU) Task Group on Emerging Technologies recommended in November 2020 that African Administrations should review their national ICT policies, broadband and digital economy strategies, recognizing that the continent is at a pivotal point regarding the future of Wi-Fi.

By providing affordable paid service and free access over hot spots, access to the 6 GHz band means over 1.4 million unconnected Kenyans would be able to gain access to the Internet by 2030. The cumulative economic value between 2021 and 2030 associated with enabling license-exempt access amounts up to US$ 20.29 billion to the Kenyan economy over the next 10 years, equating to 1.35% of the country’s GDP.

Should South Africa enable the same level of access to the 6 GHz band, it would mean over 1.25 million of the population would be predicted to gain access to the Internet by 2030. The cumulative economic value between 2021 and 2030 associated with enabling license-exempt access to the 6 GHz band amounts up to US$ 34.81 billion in GDP contribution, with up to US$ 57.76 billion to the South African economy over the next 10 years, equating to 1.39 % of the country’s accumulated GDP between 2021 and 2030.

Furthermore, the Wireless Access Providers Association (Wapa) has called on the South African government to exempt 1,200MHz of radio frequency spectrum from licencing to improve Wi-Fi networks in South Africa.

For Nigeria, the allocation of the entire band to unlicensed use will result in a significant contribution to a reduction of Nigeria´s digital divide. An incremental 1,170,000 Nigerians will be able to gain access to the Internet by 2030, as equipment capable of using this band continues to develop. The total cumulative impact of $ 72.14 billion associated with unlicensed access equates to 0.75 % of the country’s cumulative GDP between 2021 and 2030.

Countries across Africa should also consider access to TVWS to drive forward digital inclusion. In 2021, Kenya announced that access to this spectrum had been authorized, making a significant difference in addressing increasing capacity demands, especially in rural, underserved areas.

Bridging the digital divide is a constant and ongoing process; more and more countries across the world are now showing the benefits of dedicating additional spectrum for unlicensed access. For example, last year the board of commissioners in Brazil opened the full 6GHz band for restricted radiation devices. The hope is now for Brazil to emerge as a hub for development of new technologies and innovation, all of which will provide benefits for the Brazilian people and the national economy.

As indicated by the recent case studies, Argentina and Ecuador would be two countries wise to follow suit, as both nations’ economies would be significantly boosted by enabling license-exempt access. In the case of Argentina, the cumulative economic value between 2021 and 2030 associated with enabling license-exempt access to the 6GHz band amounts up to $44.02 billion in GDP contribution. Of this amount, $7.25 billion would be producer surplus to Argentinian enterprises, and $12.37 billion would be consumer surplus to the Argentinian population.

For Ecuador, the total estimated cumulative economic value of enabling the license-exempt access to 6GHz band would represent up to $27.05 billion towards the national economy between the years 2022-2031.

A decade of GDP improvements

The DSA welcomes these findings and feels this is a clear indication that unlicensed access to the 6 GHz band will benefit businesses and consumers in these nations. The populations of these countries can expect sufficient Wi-Fi capacity for data intensive video applications, 4G and 5G (data) offloading, and will allow users to take full advantage of the applications enabled by the new Wi-Fi-6E generation of equipment, such as augmented and virtual reality. Allowing unlicensed access to the 6 GHz band is critical to addressing the current demands and is essential in bridging the digital divide within the continents of Africa, Asia and South America.

DSA hopes that countries involved in these recent case studies, as well as any other nations considering allowing unlicensed access to the 6 GHz band, will follow their lead to enable better connectivity even in the most remote and underserved areas.

Read the studies in full here: