Following our 8th annual Global Summit last week, the DSA would like to thank Mr. Mario Maniewicz, Director of the Radiocommunication Bureau at the International Telecommunication Union (ITU), for taking the stage and opening the event on Tuesday, November 3rd. Speaking to attendees at his session, he outlined the ITU’s response to the effects faced by the unconnected in a post COVID-19 world, addressing the different technologies and initiatives that are best suited for providing connectivity during these difficult times. 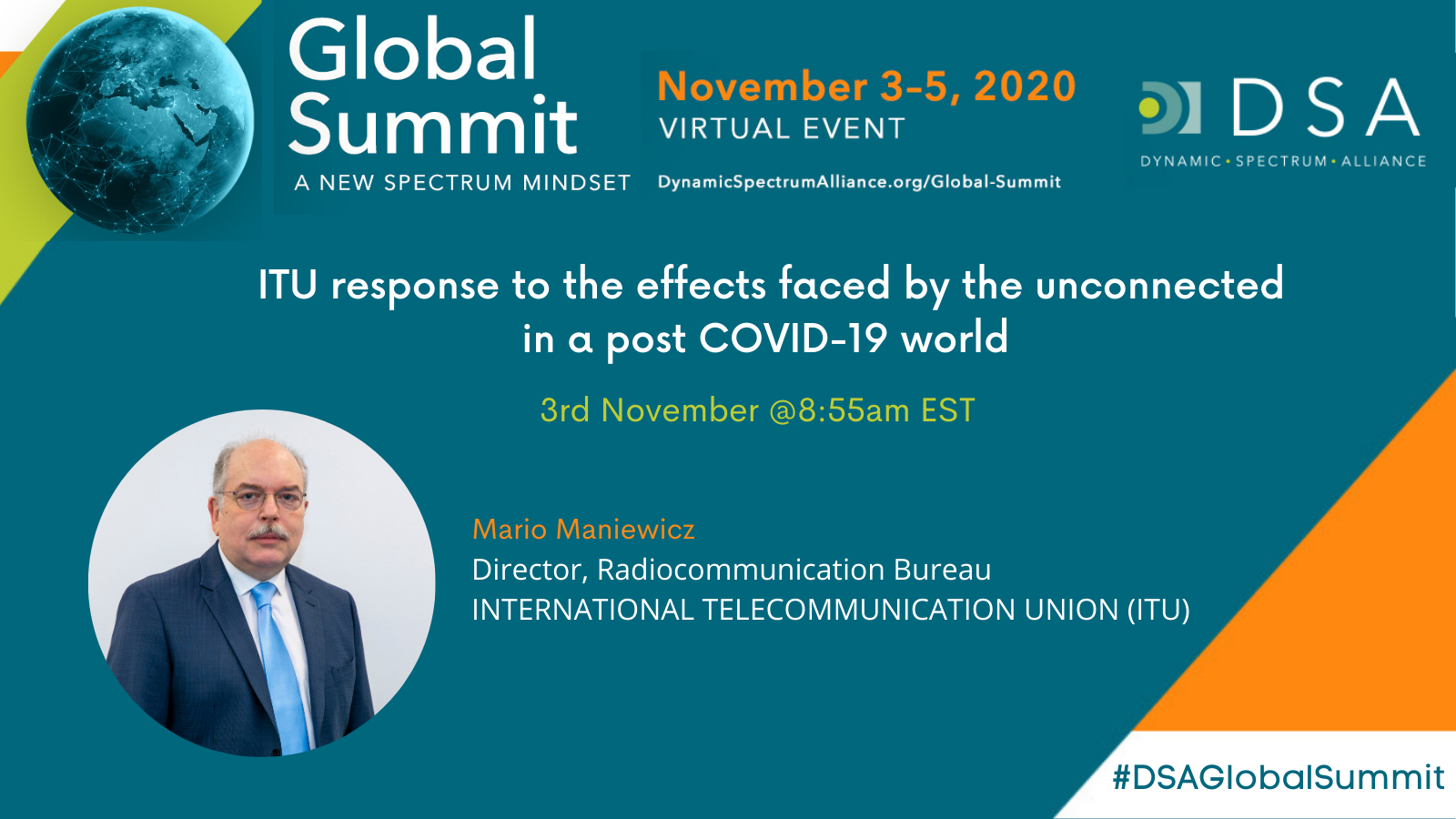 In his presentation, he advised spectrum authorities to incorporate the national regulatory framework standards approved by the ITU-R Study Groups and the changes made by WRC-19 into the national table of frequency allocation. Additionally, he encouraged them to contribute to the ongoing studies being conducted by the regional organizations of the ITU-R Study Groups in preparation for WRC-23 in order to build a long-term spectrum planning policy. He advised that the administrations should avoid defining a spectrum management policy short-term, as this may might be affected by the outcomes of the conference.

The latter statement could be understood as a message for those that assume that the upper part of the 6 GHz band (6425 – 7125 MHz) can be identified for IMT; there is no certainty surrounding this possibility, due to some services already operating in this band – this will only be decided during WRC-23.

Alternatively, his comment could be seen as a message for authorities in ITU Region 1 who are studying the upper part of the 6 GHz band (6425 – 7025 MHz) as an agenda item under consideration in the region, that includes Europe and Africa. While they could wait until WRC-23, regulators in Regions 2 and 3 have decided not to cover this agenda item, meaning that there are no ongoing studies in those regions which would restrict their progress in enabling unlicensed access. In fact, Regulators in Region 1, such as CEPT, are already in the process of opening the lower part of the bandas this portion is not under consideration for WRC-23; the 7025 to 7125 MHz frequency range is the only portion of the band that is under consideration globally, and it is up to regulators to decide if they reserve this 100 MHz segment until the end of WRC-23.

ITU-R is open to unlicensed access, enabling billions of people to use Wi-Fi networks and enjoy connectivity at home, at work and in public, and has been recognized by Radio Regulations in article 4.4. As Eric Fournier, Director for Spectrum Planning and International Affairs at ANFR France, said in response to a question following Mr. Maniewicz’s presentation “…what has been done in 6 GHz is fully in line with the Radio Regulations. We have already a mobile allocation in this band, so all administrations have the right to operate in this range…”

Mr. Maniewicz’s comment, which is a valid statement cautioning regulators not to make decisions on bands that are under study, was presented in a recent Policy Tracker article as a warning of the difficulties that unlicensed use of the 6 GHz band will harbor. From the DSA’s perspective and after confirmation with Mr. Maniewicz, this is not that case – the ITU Director’s comment is neutral and could be interpreted in a variety of different ways, none of which condemn the use of the 6 GHz band for unlicensed access. If you missed Mario’s session, we invite you to recap his full presentation here.